I've been meaning to get back into the groove with Isometric scenes, but I haven't made the time to try, I really love the look of Isometric Pixelart, and I think the boundaries don't exist for what you can do with it. My favorite part of Isometric pixelart are the scenes I've seen, such as a forest or beach where you can see under the water.

The very first pixel art tutorial i followed was for isometric. After seeing a lot of it I stopped liking it because it all looked very samey (eboy style with black outlines, bright colors, blocky characters).

After doing/seeing a lot of pixel art I realized it can really have any style, so I tried a few pieces in my own:

I probably created a few rooms for collabs and other small things.

In the end I abandoned it for the most part because I didn't like how strict and rigid it was, and I always hated games at that angle because gameboys d-pad didn't match up. It also seemed like it was mostly ideal for architecture, and I was mostly interested in drawing creatures or nature scenes.

9 years later I had an idea for a mini dungeons and dragons map, and I went with iso since it seemed like a good fit a building. 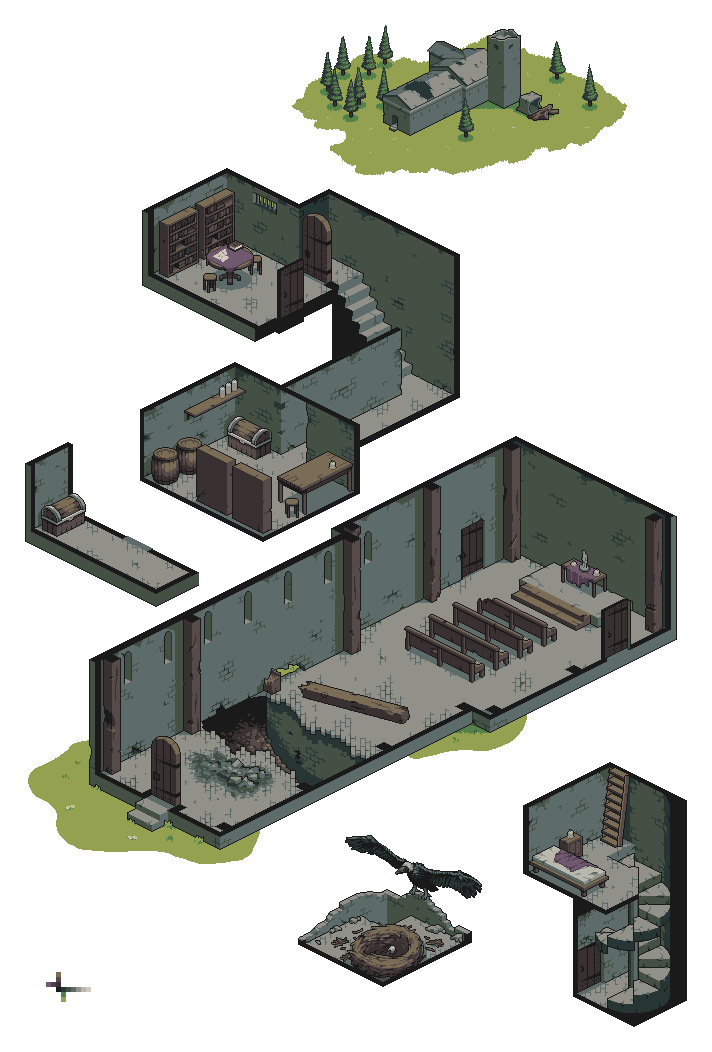 I once again tried to differ it from the common iso style, with a strict cohesive palette, more texture, and tried to hide the grid well. In the end it was a lot of struggle (which you can read more about here), but I was very happy with the result.

That said, I'm not in any rush to do it again, most of the time when I have an idea for a piece or game, I can think of a better angle to present it at. But who knows, maybe some day I'll try again.

@skeddles That DnD map is AMAZING

I've only done one so far, but I love it! I love the retro feeling that it brings without being overly simple, there's so much you can do to make it feel organic but still playable.

Here's the one I've done so far (really need to do more!)

@skeddles i see what you mean, also that big map looks like it was super hard to make